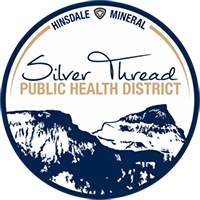 Whether you're looking for advice on opening a new restaurant or you want to know how to keep your home safe from radon, the our Consumer Protection & Environmental Health team can help.

What Is It?
Why does it matter?

We are committed to helping local businesses offer safe retail food services in our communities. Health inspections are an important part of keeping our community safe. The health inspector serving both Hinsdale and Mineral County is Jodi Linsey. Jodi can be reached via phone on 970-944-0321 or via email on jodi@silverthreadphd.org

Check out our Business Guide for everything you need to know about managing a retail food business.

If you're interested in starting a new Retail Food business, the following link from CDPHE has some resources to help you out.

The following link contains many resources from the CDPHE regarding retail food safety and environmental health, including all current regulations.

Learn how to get registered as a food manufacturer and see the updated list of Approved Sources.

The following link has several resources for food manufacturers that you may find useful, including labeling requirements.

The Cottage Foods Act allows limited types of food products that are non-potentially hazardous (do not require refrigeration for safety) to be sold directly to consumers without licensing or inspection. Below are links and resources to support your cottage food business.

These flyers are a straightforward and easy introduction to Cottage Foods.

These are some other general resources regarding Cottage Food safety and environmental health.

Air quality has one of the most significant public health impacts on our communities. Especially during fire season, monitoring the local air quality and taking appropriate precautions is strongly recommended. Below are a number of resources that may be helpful in maintaining access to healthy air & understanding air pollution regulations. For live updates on air quality, visit CDPHE's interactive map.

You can view the latest updates on Colorado's Air Quality Control Commission regulations in this resource.

You can visit their website by clicking the link below.

Lead in paint is a common issue with homes built before 1978 and can cause severe health issues, particularly in children.

Learn more about lead and its effects on your family in the link below.

If you'd like to get your drinking water tested, below are some resources for water testing for homeowners in the STPHD:

For a full list of all certified drinking water laboratories visit the Colorado Department of Public Health and Environment (CDPHE) Certified Labs website.

Private well water quality is not regulated, so providing safe drinking water from a private well is the responsibility of the well owner.

For information on installing a well, how to protect your water supply from contaminants, and water testing, visit the following resources.

"Drinking Water from Household Wells," from the Colorado Department of Public Health and Environment.

Here is a great resource for learning more about water quality in Colorado.

Each local public health agency in Colorado has adopted their own regulations that are at least as stringent as Regulation 43. These local regulations take into consideration local environmental factors and influences. For documents for the Nov. 4th 2021 hearing on amendments to OWTS Local Regulations click here.

The Silver Thread Public Health District’s OWTS Rules and Regulations are available in the link below.

For more information on hazardous materials and waste management, visit the website below.

Go to Resource
How your septic system works

This resource explains in general terms how your septic system works.

Go to Resource
Why maintain your septic system

This resource explains why it's important to maintain and preserve your septic system.

Go to Resource
How to care for your septic system

This resource teaches you how to properly care for your septic system.

The CPOW has several different resources regarding wastewater management and treatment, besides trainings and conferences in this area.

The following resource is a guide on how and why to maintain your septic system, done by EPA.

The Onsite Wastewater Treatment System program operates through each county building or land use planning department. For more information on how to apply for a permit, check a system, or general questions on the rules and regulations for our counties, please check with your county's contact listed below:

*All fees for OWTS should be made payable to the county in which the property is located.

Every year over 20,000 people die in the U.S. from lung cancer caused by radon.

Radon is a naturally occurring invisible, odorless gas that can enter any home through cracks and gaps in the foundation. Radon decays into radioactive particles that, when inhaled, can damage the DNA in sensitive lung cells. The damaged cells can then become cancerous.

Colorado has some of the highest incidences of radon in the United States, with more than 50% of homes registering high radon levels.

Living in a home with average levels of radon (6.4pCi/L) for one year is like having 200 chest x-rays every year.

Testing for radon is easy - simply contact the Hinsdale County Building Official to ask about borrowing a Continuous Radon Monitor at 970.944.2225.

*The Radon Detector is only available to Hinsdale County residents.

If you do have high levels of radon in your home, fixing the problem is easy and inexpensive.

Fixing radon issues in your home

For full details, download this guide to fixing radon issues in your home.

Go to Resource
Radon and its effects

You can learn more about radon and its effects on you and your family in the infographic below.

Tire recycling, or rubber recycling, is the process of recycling waste tires that are no longer suitable for use on vehicles due to wear or irreparable damage. These tires are a challenging source of waste, due to the large volume produced, the durability of the tires, and the components in the tire that are ecologically problematic.

Because tires are highly durable and non-biodegradable, they can consume valued space in landfills. If waste tires are improperly managed they may cause rubber pollution. In 1990, it was estimated that over 1 billion scrap tires were in stockpiles in the United States. As of 2015, only 67 million tires remain in stockpiles. From 1994 to 2010, the European Union increased the amount of tires recycled from 25% of annual discards to nearly 95%, with roughly half of the end-of-life tires used for energy, mostly in cement manufacturing.

In 2017, 13% of U.S. tires removed from their primary use were sold in the used tire market. Of the tires that were scrapped, 43% were burnt as tire-derived fuel, with cement manufacturing the largest user, another 25% were used to make ground rubber, 8% were used in civil engineering projects, 17% were disposed of in landfills and 8% had other uses. (Excerpted from Wikipedia)

We hope the resources below will help you find a home for your used tires.

What are waste tires?

This tire recycling wikipedia page offers a wealth of information and context for what waste tires are.

The CDPHE Small Landfill page has several useful resources regarding this topic. As well as this link to their specific Waste Tire section.

The following link has information about the Hinsdale County Transfer Station.

Go to Resource
Back to Menu